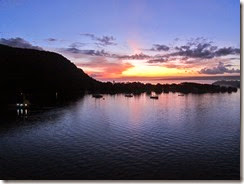 I took a cruise around the Pacific on a P&O ship.  It was like time had stood still – how the Pacific Islands have been travelled before the 737.

As we left one island, I walked out from the bar onto the Promenade deck . The sun was setting over the island in a burst of colour.

Posted by The Weary Traveller at 12:19 AM No comments: 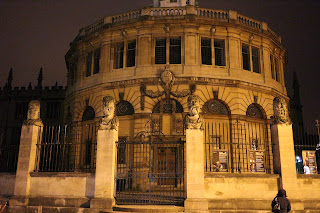 I always had a fascination for Oxford University.  A few years ago I discovered that they did external degrees that could be completed by distance education.  I applied and was accepted and in due time I completed the course, albeit not with a very impressive mark.

And so in early 2013 I flew to the UK for my Oxford Graduation. It was midwinter, late at night and freezing cold as I walked along Broad street, after dinner at the Mitre, a classic English inn.  I was staying in Rowley house, and walked past the Sheldonian.

The following day I graduated inside this building.

The Sheldonian Theatre,  designed by Sir Christopher Wren, was built in 1664, and is the venue for all Oxford University graduation ceremonies. The building is named after Gilbert Sheldon, chancellor of the university at the time and the project's main financial backer.

The photograph was taken handheld on my Canon EOS M.
Posted by The Weary Traveller at 5:06 AM 1 comment:

I was waiting for my flight out of Tuvalu, having a beer in the hotel bar.

I had just been talking to an engineer who was looking at resurfacing the runway. The coral underneath is collapsing under the weight of modern planes. It was only build to take lightweight US Army bombers, in 1944. A temporary wartime airfield that was still in use.

I was just digesting this slightly worrying information when my plane arrived.

Had I seen it in an aircraft museum I would have admired its grace and beauty.

Instead I was unwillingly pushed aboard by a hostess, and endured a flight back to Fiji in it. 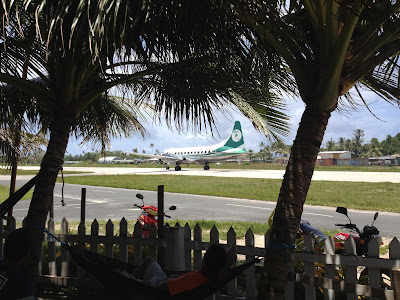 Posted by The Weary Traveller at 10:32 PM No comments: 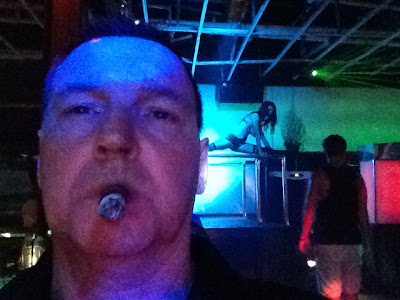 After spending Easter 2012 in Sydney I flew up to Bali for a couple of weeks, on my way up to Jakarta.

I stayed at the old Imperial at Seminyak, which had changed its name again. Now it’s the Royal Beach. That place changes names more often than a hooker changes undies.

It is still a quality hotel though, and in a quiet part of Bali. You can walk in 15 minutes down to the seedy fleshpots of Kuta if you want to risk the beach. I say risk because during the day the beach is full of hawkers trying to sell you crap, and at night its full of drunks and thieves who try to take the crap back off you.

Bali is an incredible place that engenders a real love-hate relationship. Touristy and tacky one minute, and serene and fascinating the next. You walk past bars full of drunken Aussies shouting and fighting, turn a corner and in front of you is a Buddhist temple with a ceremony taking place.  Bali people are calm and gentle, and put up with a lot of crap from tourists.

I was shocked to discover that the Double 6 club is gone, as too is Déjà vu. The two kingpins of entertainment on the Seminyak side of Kuta, both gone in a year.

Double 6 was legendary around the world. It opened at 6pm and closed at 6am (hence the name) and the nightclub had a huge pool and a bungy tower in the middle of it.  An entry fee kept the riffraff out, and the drinks and fun flowed like water.  It first opened in 1987 and had a 15,000 watts sound system that you could hear halfway across Bali. They would even let you ride a motorbike off the bungy tower. The place was like that.

Déjà vu was just up the road and now it’s a fancy restaurant.  I last had a drink there a couple of years ago, and it was a zombi bar by then, dead but not buried yet.

The action is now back in Kuta, near where the 2002 bombings took place.  Savvy marketers might wince at the idea of opening a nightclub within sight of a huge memorial to the 202 who died in a nightclub bombing, but not the Indonesians. They even named one bar after the one that got blown up.

The best by far is Skygarden, a huge complex of bars on multiple floors, each with a different flavour of music.  The place gets packed, and they let Westerners in for free but charge the locals to get in, unless they are accompanied by a westerner. This bizarre ruling results in a pool of local hotties hanging around the entrance trying to get a Westerner to escort them inside.

They have a number of performers in the clubs, including girls who look like pole dancers on steroids, and fire dancers  - with a half naked girl with a blazing hoola hoop.  I kid you not.

One of the fire dancers took a shine to me, and got real close during her performance, as she lit the cigar I had just pulled out of my pocket.   The result was a lot of singed hair and eyebrows, and a big grin on my face. The cigar however tasted of kerosene, and she dripped burning fuel all over my trousers. A kindly barmaid put me out with a wet tea towel.
Posted by The Weary Traveller at 10:12 PM No comments:

In February 2012 I found myself in Auckland New Zealand, attending a Pacific Association of Supreme Auditing Institutions governing board. 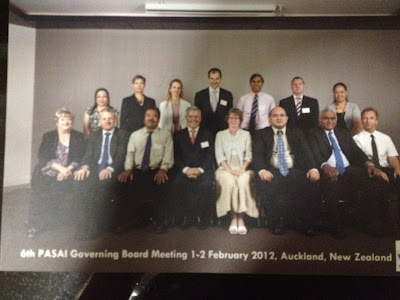 Posted by The Weary Traveller at 9:59 PM No comments:

Tuvalu, which was called the Ellis islands,  became independent of the UK in 1978. It almost feels like a small UK town or village. Albeit a village that sits on sinking coral and rising oceans. Which is a bit of a worry as most of the atoll is actually below sea level.

Like so much of life, the real story of Tuvalu’s problems are not told. The Americans arrived here in 1943, and built an airfield. Rather than import rock to do so, they scrapped the island away, digging huge borrow pits, crushing to coral and using it to build the runway, which is raised to avoid the sea on what was already a low lying island. They then bulldozed the island even more, to create low sea walls, to protect the airfield. All of this lowered the middle of the island to below sea level. Not a top idea.

Now at high tide the water seeps up in the low lying areas, slipping under the sea walls. I have photos already to prove this. You can see the high sea walls, the raised runway, the lower areas around them and the big holes where the American engineers dug out the materials they needed to create concrete.

Now everyone photographs the water and yells global warming. I think they should yell “American Ceebees”.


Every day on Tuvalu I would walk over from the Government Offices where I was working to a little hotel (where Princess Ann once stayed) and have lunch on a platform over the beach. The views were spectacular. 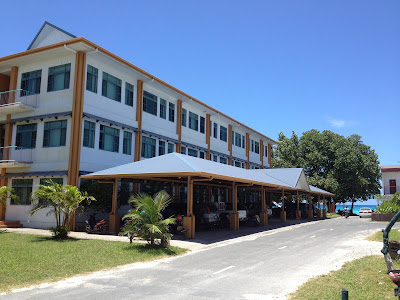 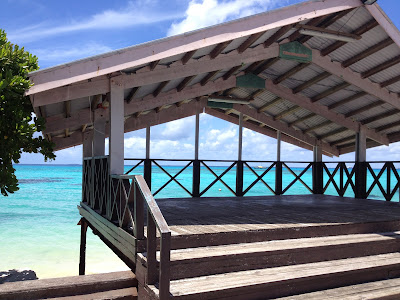 The view to the left: 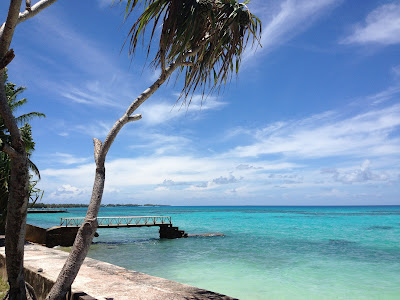 And the view to the right: 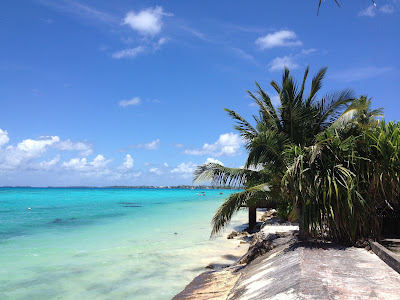 Posted by The Weary Traveller at 9:37 PM No comments: 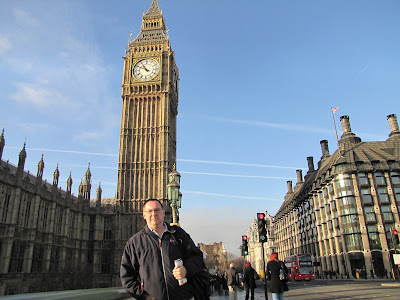 Whilst in the UK I took the train down to London for the day on Christmas Eve.

I felt like Richard Hannay,  the John Buchanon  character from the book "The 39 Steps" who returns to London after many years as a colonial expat.

It had been over 20 years since I had last been there, and a lot of things had changed. London, always a cultural and racial melting pot, was now like a giant UN meeting.

The place seemed cleaner, more colourful and vibrant than I remembered, but perhaps that is just old memories playing tricks.  A lot of things were still the same though. London double decker buses, black taxis, Harrods, the underground.

And as I do every time I visit, I marvelled at the white portland stone buildings, each one seemingly holding a place in history.

Posted by The Weary Traveller at 7:33 PM No comments: